Our second blog on the Dangers of Sweetners… You need to be informed about Aspertame.  What is interesting is how it and other artificial sweeteners find their way into “foods” and we’re poisoned without being aware.  Please learn to read labels, or better yet, eliminate processed foods from your pantry.

There is an epidemic across North America today of Multiple Sclerosis and Lupus.  Most people do not understand why this epidemic is happening, and they do not know why these diseases are so rampant.  I would like to share with you the main reason we are having this very serious problem.

Many people today use artificial sweeteners in their tea or coffee.  They do this because the ads they see on TV tell them that sugar is bad for their health.  This is absolutely true.  Sugar is toxic to us, but what most people use as a replacement for sugar is much more deadly.

I am talking about Aspartame.  It is the cause of the epidemic that was mentioned above.  Aspartame is an extremely toxic chemical that is produced by a chemical company called Monsanto. 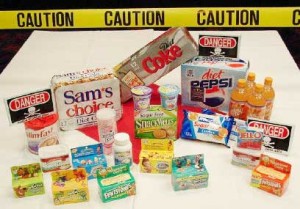 Aspartame is being marketed around the world as a sugar substitute and is found in all diet soft drinks, such as Diet Coke and Diet Pepsi.  It is also found in artificial sweeteners such as NutraSweet, Equal, and Spoonful; and it is used in many other products as a sugar replacement.

Aspartame is marketed as a diet product, but it is not a diet product at all.  In fact, it will cause you to GAIN weight because it makes you crave carbohydrates.

Causing you to gain weight is only a very small part of what Aspartame does.

Aspartame is a toxic chemical that changes the brain’s chemistry. It can and does cause severe seizures.  This chemical changes the dopamine level in the brain, and it is particularly deadly for anyone suffering from Parkinson’s disease.

Formaldehyde is grouped in the same class of poisons as Cyanide and Arsenic – which are very deadly toxins.  The only difference is…  Formaldehyde kills quietly, and it takes a little longer.  And, in the process of killing people, it causes all kinds of neurological problems.

One of these symptoms is Lupus, which has become almost as rampant as Multiple Sclerosis, especially with Diet Coke and Diet Pepsi drinkers.

When someone develops Lupus as a result of using Aspartame, they usually do not know that the Aspartame is the culprit.  They then continue to use Aspartame, which aggravates the Lupus to such a degree that it sometimes becomes life threatening.

When people finally get off the Aspartame, the severity of the Lupus decreases.

It is generally believed that once you develop Lupus, you will have it for the rest of your life, but this is not so.  Lupus can be defeated with some very special treatment.

When those who suffer from Aspartame Poisoning stop using Aspartame, most of the symptoms of Multiple Sclerosis disappear.  There are many cases where someone’s vision has returned, and even their hearing has returned.

We have a very serious problem here.  More and more people who are heavy Diet Coke and Diet Pepsi drinkers are being diagnosed with MS.

This also applies to other diseases.  If you are using Aspartame and you suffer from Fibromyalgia symptoms such as spasms, shooting pains, numbness in your legs, cramps, vertigo, dizziness, headaches, tinnitus, joint pain, depression, anxiety attacks, slurred speech, blurred vision, or memory loss, you probably do not have Fibromyalgia, you very likely have Aspartame Poisoning.

At the Conference of the American College of Physicians, doctors admitted that they did not know the cause of the epidemic in MS and Lupus.  It is believed that the phenylalanine in the Aspartame breaks down the seizure threshold and depletes Serotonin, which causes manic depression, panic attacks, rage, and violence.

According to the Conference of the American College of Physicians, “We are talking about a plague of neurological diseases caused by this deadly poison”.

Aspartame is especially deadly for diabetics.  All physicians know what wood alcohol will do to a diabetic.  There are many cases where physicians believe they have a patient with retinopathy, when in fact, the problem is caused by Aspartame.  The Aspartame keeps the blood sugar level out of control, causing many patients to go into a coma.  Unfortunately, many diabetics who have used Aspartame have died.

There are many recorded cases where diabetics have switched from Saccharin to an Aspartame product, and many of these people have eventually gone into a coma.  Their physicians could not get the blood sugar levels under control.  Thus, the patients suffered acute memory loss, and eventually coma and death. 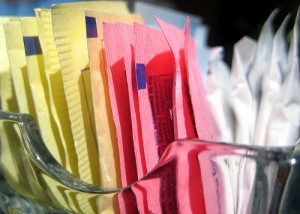 Dr.  Roberts realized what was happening when Aspartame was first marketed and used.  He said that his diabetic patients who used Aspartame presented memory loss, confusion, and severe vision loss”.  The methanol in the Aspartame converts to Formaldehyde in the retina of the eye, and causes people to go blind Memory loss is due to the fact that aspartic acid and phenylalanine are neurotoxic without the other amino acids found in protein.  Thus it goes past the blood brain barrier and deteriorates the neurons of the brain.

Aspartame Disease is partially the cause of what is behind some of the mystery of the Desert Storm health problems (Gulf War Syndrome).  The burning tongue and other problems discussed in over 60 cases can be directly related to the consumption of an Aspartame product.

Several thousand pallets of diet drinks were shipped to the Desert Storm troops.  (Remember that heat can liberate the methanol from the Aspartame at 86 degrees F).  These diet drinks sat on pallets in the 120-degree F.  Arabian sun for weeks at a time.  The service men and women drank them all day long, and all of their symptoms are identical to Aspartame Poisoning.

According to Dr.  Roberts, another serious problem is that consuming Aspartame during pregnancy can cause birth defects.  When the Aspartame attacks the nervous system it does not allow the unborn child to develop properly.

Aspartame consumption has also been shown to lead to cancer.  In the original lab tests on Aspartame, animals that were given Aspartame developed brain tumors.  The phenylalanine breaks down into DXP, which is a brain tumor agent.

How serious is this Aspartame Poisoning?  A mother who had a child on NutraSweet was told to get her child off the product.  The child was having grand mal seizures every day.  The mother spoke to her doctor, who called the ADA, who told the doctor not to take the child off the NutraSweet.  They are still trying to convince the mother that the Aspartame is causing the seizures.  Every time you take a grand mal seizure victim off of Aspartame, the seizures stop.

Here is the major problem.  Congressional Hearings were held when Aspartame was originally approved for use in 100 different products.  Since that initial hearing, there have been two more hearings to try to ban this product, but to no avail The drug and chemical lobbies have very deep pockets This list of 100 has now expanded to where there are over 5,000 products containing this chemical, and the patent has expired.  Also, Aspartame is now available in over 90 countries around the world.

There is a bit of hope.  Stevia, a sweet herb which helps in the metabolism of sugar, and which is proving to be ideal for diabetics, has now been approved as a dietary supplement by the F.D.A.  For years, the F.D.A.  had outlawed this sweet food because of their loyalty to Monsanto.

Senator Howard Hetzenbaum wrote a bill that would have warned all pregnant mothers and children of the dangers of Aspartame.  The bill would also have instituted independent studies on the problems existing in the population (seizures, changes in brain chemistry, changes in neurological and behavioral symptoms).  It was killed by the powerful drug and chemical lobbies, letting loose the hounds of disease and death. 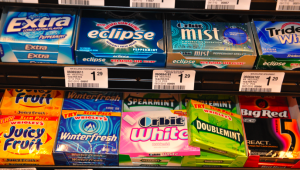 We ask that you help to get the word out about Aspartame.  Print this article and distribute it to everyone you know.  There are a lot of people out there who must be warned, PLEASE let them know this information.  You might want to print it out, hand it to your friends, or fax it to people who are not online.

Young people drink a lot of Diet Coke and Diet Pepsi, and because of this, they are the most susceptible to Aspartame Poisoning.  Please let your children know about the toxins in these drinks.

A large number of adults use Nutrasweet, Equal, or Spoonful.  They also need to be warned of the dangers in those products.

For more convincing points on sweeteners read our previous posts: