Below is a recent article by Crystal Phend, Senior Staff Writer, MedPage Today regarding how our household cleaners pose a risk to our young children. 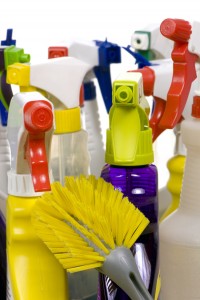 Early childhood injuries from household cleaning products dropped by almost half over the past two decades, largely due to child-resistant packaging — but the number of injuries still remains high, according to analysis of a national database.

Overall, the number of kids ages 5 years and younger treated in emergency departments for household cleaning product-related injuries fell 46% from 22,141 in 1990 to 11,964 in 2006 (P<0.001), found Lara B. McKenzie, PhD, MA, of Nationwide Children’s Hospital in Columbus, Ohio, and colleagues.

Child-resistant packaging mandated for the most dangerous products — furniture polish, drain cleaners, and oven cleaners — appears to be partly responsible for the overall drop, McKenzie’s group reported online ahead of print in the September issue of Pediatrics.

One reason is that spray bottles don’t feature the same degree of safety mechanisms that other types of bottles and containers do, McKenzie noted in an interview.

“The locking mechanism on spray bottles isn’t really child resistant and it may be easy for [children] to manipulate,” she told MedPage Today.

McKenzie recommended that household cleaners and other poisonous substances be stored in locked cabinets after every use — out of sight and out of reach.

The trade association for cleaning product manufacturers, the American Cleaning Institute, responded to the results by reiterating the time-honored warning: Keep out of reach of children.

In a press release, the association urged parents to read the product label safety and usage information, then store products up and away.

The researchers examined household cleaner-related injuries treated from 1990 through 2006 at the network of roughly 100 hospitals that form the nationally-representative sample that reports to the National Electronic Injury Surveillance System (NEISS).

They narrowed the search to cases that occurred among children ages 5 and younger — since most poisonings occur in this age group — largely because of small children’s curiosity, mobility, and desire to put things in their mouths, McKenzie’s group noted.

Cleaning products are consistently in the top five causes of pediatric poisoning exposure, given the amount of time young children spend in the home, the researchers noted.

In the current analysis, bleach represented the most common culprit (37.1%).

The next most common source of injurious exposure (30.4%) was from low-molecular weight hydrocarbons such as those found in pine oil products and spot removers; acids and alkalis, such as oven cleaners and toilet bowl cleaners; and dish or laundry detergents.

Ammonia products accounted for 2.5% of cases.

The analysis excluded exposures outside the home, those that involved submersion or allergic dermatitis, and those that resulted from shampoo and other personal cleaning products, boric acid, methacrylic acid, battery acid, or ammonia inhalants.

Most household product injuries came from ingestion (62.7%). Not surprisingly, then, poisoning was the most common type of injury (68.4%), followed by chemical burns (15.9%) and dermatitis or conjunctivitis (10.4%).

Only 5.6% of cases required hospitalization. The one case fatality was excluded from the study since, McKenzie’s group explained, NEISS is generally regarded as a poor source for identifying fatal injuries.

The researchers cautioned that their study likely underestimated the number of injuries sustained by young children from household cleaners because it did not include injuries treated outside of emergency departments.

Also, the data on the mechanism of injury, the source, and container came from case narratives, which may have been subject to reporting or interpretation errors, they noted.

It’s vital that we carefully choose our cleaning products as well as where we store them.  For toxic free and powerful products check out Shaklee’s GetClean Products!