I feel a little like Benjamin Franklin. I’ve made a discovery I want to share with the world! OK it may not be as life changing as electricity, but for this busy working mom it’s nearly as good.  I have discovered a new weapon in the fight to eat healthy… the time-saving power of the crock pot!

Maybe you aren’t new to cooking with a crock pot but I grew up in South Florida and we didn’t even own one! I have friends who had them but it seemed to be the type of kitchen appliance you used to make things like bacon double cheese dip, or creamy chicken casserole. Whatever it was, it wasn’t healthy.

But here’s what I’ve discovered. The crockpot CAN be used to make nourishing delicious meals! In the last year I’ve been doing a lot of experimenting in the kitchen to find ways to translate healthy dishes into crockpot worthy recipes. I’ve put 30 of the recipes together in my new cookbook The Thankful 30 Crockpot Edition. 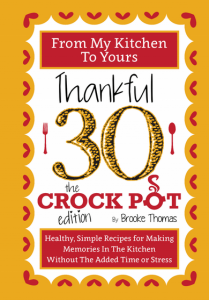 I’ve also come to realize not all crock pots are created equal. If you are going to become a crock pot convert you need to make sure you have the right equipment. Here are a few crock pots that really get the job done and make the whole process easier (now if I could just find one that cuts up veggies for me!)

This 6-quart capacity slow cooker features a Smart-Pot pre-set digital control. It allows you to program cook times anywhere from 30 minutes up to 10 hours and it automatically shifts to warm when cooking time is complete. Easy-to-use locking lid makes transporting contents easy. $59.99, belk.com

ALL AROUND BEST FOR THE MONEY 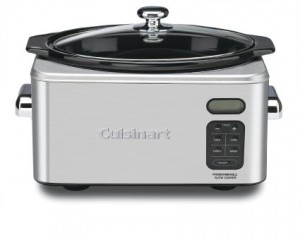 Woman’s Day names the Cuisinart PSC-650 as a top pick, saying the touchpad controls make it easy to operate. The Good Housekeeping Research Institute also recommends the Cuisinart PSC-650, saying it cooks well and that its simmer setting is handy for cuts of meat that require very long cooking times.  It’s programmable and offers touchpad controls, a 24-hour timer and four temperature settings: high, low, simmer and warm. When timed cooking ends, the machine automatically shifts to the warm setting, which it will hold for up to eight hours. The unit comes with a three-year limited warranty, which is longer than most slow cookers. $85.99 amazon.com 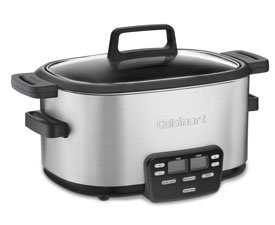 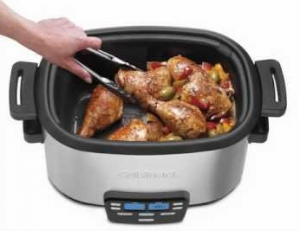 This puts the genius in slow cooking! It is fully programmable and switches to a warming setting after its done cooking. Plus, here’s the best part! You can brown or saute meat or vegetables right in the unit itself then just flip to the slow cook setting! That’s one less pan to clean for those recipes that require browning first!  $159.99 www.bedbathandbeyond.com 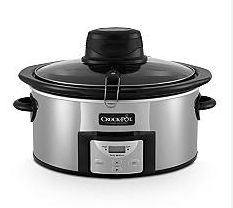 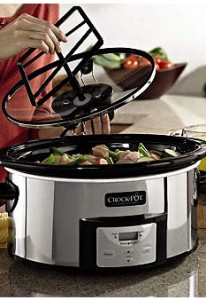 This CrockPot iStir Automatic slow cooker includes a lid-mounted stirring system with two paddles for even cooking and reduced hot spots. That’s right, stir without opening the lid! Brilliant! But before you get blinded by the feature, make sure it’s one you really need. If you make a lot of soups and chili’s then this one is for you. A digital countdown allows programmed cooking times from 30 minutes to 20 hours and automatically shifts to warm when cooking is done. $74.99 (available at Belk, Amazon, Macys, Walmart)